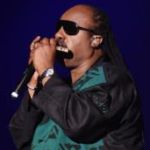 Following last night’s performance in Birmingham, there was no time to get excited about tonight’s show, even though it was day 2 of 6 on the Stevie Wonder adventure trail.

I managed to fall asleep around 3am, but was awake around 8am.  The reason wasn’t excitement, but the fact there were 8 men in the back garden starting work on a new patio.  The timing of both the work and the tour was a test, especially for an insomniac.

I can be impatient, so I aim to time things perfectly, thus keeping any waiting time to a minimum. Unfortunately, this means that I’m late most of the time. For a change, I decided to get the earlier train to London Euston, giving me enough time to collect the tickets for the trip to Manchester Picadilly. However, a long queue for the machine at the local train station, meant I had no time to purchase a ticket, thinking I’ll just buy one at the other end.  The train inspector begged to differ. I had the choice of getting off at the next stop and purchasing a ticket, thereby losing another 30 minutes or paying a £20 fine. Decided the fine was the only option, considering I had left earlier to enable a trouble-free journey!

Arrived at Euston to collect the tickets from the self-service machines. I tried a number of times, but no booking could be found. It then dawned on me, that I’d used a new credit card to make the booking and that was still on the coffee table back home! There was a long queue at the ticket office and time was running out before the train’s departure. The guy behind the desk couldn’t have made the situation more difficult and my stupidity any clearer. Eventually, he issued new tickets, minutes before the train’s departure.

Just to prove these things come in 3’s, at the hotel my booking of 2 twin beds, was somehow amended to 1 double. This felt like something out of the Truman Show or maybe I was on an episode of Beadle’s About. But after checking the original booking, the receptionist changed it back to the relief of both myself and my friend.

After a nice oriental meal, we went off to the MEN Arena. I pretty much gave away 2 spare tickets to a tout minutes before the show, who in turn made a tidy profit, selling them to a couple who turned up without tickets, just before 8pm.  So the tout made a profit and the couple still got in for half the ticket price.

Stevie Wonder was once again led on stage by Aisha Morris: his daughter and one of the backing singers.  My excitement was there for all to see, as he commenced with another array of songs from Hotter Than July.

Once again Stevie took time out to address the crowd, in respect to the passing away of his mother. Once again, the crowd listened to every word, feeling his pain.

Thankfully, unlike the previous evening at the NIA, where at times the show was broken up with a few too many interruptions, Stevie Wonder gave an amazing performance and the crowd loved him even more for it.  The fans in the arenas in both Birmingham and Manchester made him feel he’d made the right decision to tour Europe again.

The best thing about tonight’s show was that Stevie decided to mix things up a bit.  Whilst the majority of the songs were the same as those he performed at the NIA, the audience at the MEN Arena were blessed to hear 3 of my all time favourites songs: As, Do I Do and Knocks Me Off My Feet. Stevie also performed Isn’t She Lovely, a song famously written about Aisha, when she was baby. It was great to see Stevie joking about it with Aisha on stage too.

Once again, a superb show.  With a slightly different set, it flowed much better and I loved it!