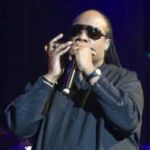 I had hoped to see Stevie Wonder perform live in concert again, ever since the Natural Wonder tour way back in 1995. I didn’t expect to go to Birmingham, but when struggling to get tickets for the O2, I simply had to book the NIA.

In addition, I booked tickets for the MEN Arena in Manchester and two nights at the O2, as soon as extra dates were released.  The bookings didn’t stop there, as Paris and Stockholm were added.  A total of 6 nights to make up for a 13 year-long wait.

We drove up to Birmingham early, giving us plenty of time to grab a bite to eat. Ended up having gourmet burgers, accompanied with a bottle of champagne.  Arriving at the NIA, we took our seats in anticipation.  I had hoped that Stevie would perform a song from Hotter Than July, as this was my most played album since the mid-80s.

Stevie Wonder was led on stage by Aisha Morris: his daughter and one of the backing singers.  A Wonder Summer’s Night Tour began with As If You Had Read My Mind, All I Do, Rocket Love, Did I Hear You Say You Love Me and Master Blaster.  Wow, I had hoped for one song from my most played album of all-time, but amazingly I got five!

Stevie took time out to address the crowd, explaining what motivated him to tour again.  The next few moments were really tough. He began talking about the death of his mother in May 2006.  Only then did it hit home, when I realised that my mother had passed away 6 weeks earlier, in April 2006. For a minute or so, he explained the anguish he was going through, summing it all up with “I wanted to take all the pain that I was feeling and turn it into joy”.

There were a few odd moments, where the audience probably felt a bit lost during the show.  Notably, when Stevie introduced George Boateng, the ex-Villa midfielder. He arrived holding a statue, honouring Arthur Wharton, the world’s first black professional footballer, from 1885. The link being both players were born in Ghana.

It didn’t take long for Stevie to deliver some exceptional performances.   These included Visions, Ribbon in the Sky, Don’t You Worry ‘Bout a Thing, Higher Ground, Living for the City, Signed, Sealed, Delivered I’m Yours, Uptight (Everything’s Alright), My Cherie Amour, I Was Made to Love Her, Overjoyed, I Just Called to Say I Love You, Superstition, I Wish and Sir Duke.  Stevie ended with an extended version of Always.

I loved the show, then again I’m a biased Stevie Wonder fan.  To be honest, he had me at ‘the first 5 songs’!