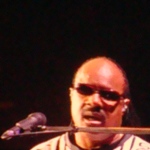 Following the shows at the NIA and MEN Arena earlier in the week, I was really looking forward to going to the O2, especially as we had floor seats this time around.

I wasn’t really sure what to expect, as this was the first visit to the O2. I was hugely impressed. I don’t think I have ever seen so many restaurants and bars in one place. When you enter the O2 arena itself, you get the sense that you are in a mini-stadium with a roof. Whilst not as close as A block, our front row seats in D block, gave us ample space to dance away.

To my great satisfaction, Stevie Wonder opened again with half the songs from Hotter Than July. Before the tour, I was hoping just to hear one of these, but to get 5 each night was more than I could have hoped for.

As with previous shows, Stevie took time out to address the crowd, in respect to the passing away of his mother. Not quite sure what the crowd at the O2 made of his pain. But from my perspective, it was once again difficult to hear, considering the parallels we both went through in 2006.

Stevie Wonder sang the usual collection of obscure and hit songs that I’d heard earlier in the week. I was delighted that he also performed We Can Work It Out, the outstanding Lately and one of my all time favourites Golden Lady. And just for fun, he also played a rendition of London Bridge is Falling Down!

Unlike the NIA and MEN Arena shows, I left with the feeling of slight disappointment. This had nothing to do with Stevie Wonder’s performance, as he was outstanding. The O2 was lacking slightly in atmosphere. Maybe the sound wasn’t as loud as it should have been or maybe large parts of the crowd turned up expecting to see him just perform his greatest hits. It was as if half the crowd had never even heard of Visions or All I Do before. I guess they were pleased when he sang I Just Called To Say I Love You and Signed Sealed Delivered, I’m Yours.

All said and done, it was another great experience. I got to see Stevie Wonder again, had much more space available to dance and was fortunate to hear Lately and Golden Lady live!