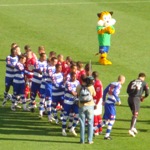 Finally, after 3 seasons in League 1, Nottingham Forest – the only European Cup Winners to play in the 3rd tier of their national league were back in the Championship again.

However, a horrific start to the campaign meant Forest were rooted to the bottom of the table, with only 1 win in 10 games. A match against high-flying QPR was going to prove a difficult test. On a personal front, finding our seats was by far the toughest challenge. Eventually, we narrowed it down to the two below. Of course, one of them was definitely ours, but not so sure about the other. 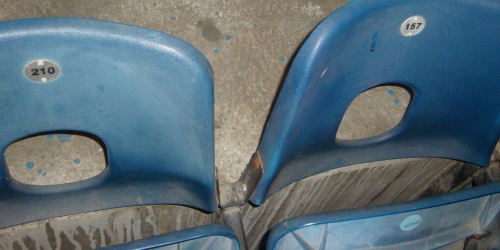 Sadly, that ended up being just one of the two highlights we were to experience on the day.

QPR were quick off the blocks and apart from a couple of tame opportunities from Andrew Cole and Nathan Tyson, the home side were firmly in control. At half-time the scores were level at 0-0. However, after just 3 minutes into the second half, Angelo Balanta gave QPR the lead. With just under an hour gone, a stunning strike by Akos Buzsaky, gave QPR a 2-0 lead.

Forest then tried to get back into the game, but by then it was too late and only luck would have got us anything out of the game. In fact, Lewis McGugan did come on and managed to pull one back. An excellent free-kick with 7 minutes to go, was the only other notable highlight, but by then the damage had already been done.

Colin Calderwood’s Nottingham Forest are now propping up the table and only drastic measures can save them from going back to League 1. I feel sorry for the thousands of loyal Forest fans who made up a large percentage of the 15,122 attendance. It just simply isn’t good enough.