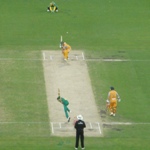 A few days after witnessing Melbourne Victory’s success at the Telstra Dome, another sporting opportunity arose. This time it was Cricket’s turn, with Australia taking on South Africa in the 1st 20/20 match of the series at the famous MSG.

The Melbourne Cricket Ground is a world-class stadium with a capacity of over 100,000. A crowd of 62,148 turned up hoping that Australia would avenge their recent Test defeat at the hands of South Africa.

Australia came out flying with David Warner, who’s yet to even make a Test appearance, smashing 7 fours and 6 sixes on the way to an impressive 89. Nevertheless, Australia finished on 182/9, well within South Africa’s target.

However, a disastrous start by South Africa left them on 12/3 and with a mountain to climb. JP Duminy did his best to recover the situation with 78 off 48 balls, but his support was non-existent. South Africa were eventually all out for 130, resulting in Australia winning the 1st test comfortably by 52 runs.

The night was a fantastic experience. Of course, not realising how cold it gets at night in MCG, meant a frantic search for warm clothes at the club shop in between innings. I did wonder though on the way out why thousands of people were queuing to get into one of the entrances of the Metro, when about 50 metres away, there was another entrance without a single person queuing. Maybe, it was their first night at the MCG too!