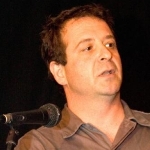 I’ve enjoyed The Mark Thomas ‘Comedy’ Product for years and have seen him perform live on a few occasions. So it’s always a pleasure when there’s another opportunity to see him in action.

Over the years, Mark Thomas has tackled a number large corporations and institutions who use their immense power to pretty much do whatever they like. The huge number of Nestle internal emails mentioning his name, was proof of how much a nuisance he has become to big business.

On a previous tour, among other things, Mark Thomas examined the likelihood that Santa Claus wears red as a consequence of early Coca Cola adverts, local villages were being drained of water supplies in places Coca Cola had set up factories, and that Fanta Lemon was created during the reign of the Nazi party, as it was not possible to produce Coca Cola locally in the 1930s.

The work in progress nights formed part of the Manifesto tour, where Mark Thomas was able to test some of his material. Audience members that had arrived early were able to write down ideas/policies for inclusion in our very own manifesto. It was a fun experience and pretty amazing to hear some of the stuff the audience had come up with. Some were quite clever, some were completely dismissed (mine included) and some took imagination to a new level.

Once again, the political commentator and comedian performance was enlightening. I consider Mark Thomas an educational comedian, as I always leave an event feeling like I’d just attended a Master Class.