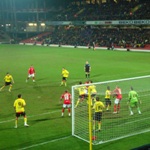 The honeymoon period tasted by Billy Davies since taking over from Colin Calderwood had already come to an abrupt halt. Lying just outside the relegation zone, Forest needed something out of the game against Watford, in their pursuit of Championship survival.

On a run of 3 games unbeaten, Forest seemed to be turning the corner once again. However, Forest have a tendency to allow teams to dictate the style of football, especially away from home. True to form, this was not going to be any different, with Watford’s long ball approach, becoming the style both adopted.

The pitch may take part of the blame, but there is no point trying to play a style of football for 90 minutes, especially if the opposition is far more experienced at it. This was emphasised whenever Forest had a goal kick. Not since watching under 11s play football had I seen 20 players move across to same side of the pitch waiting for the tallest person to either head it on or head it away. With so much space on the other side of the pitch, it baffles the mind why the footballing side never tried to exploit it.

Watford started the game positively and a Grzegorz Rasiak header in the 5th minute gave them an early lead. Probably against the run of the play, Forest managed to equalise from a Matt Thornhill shot in the 17th minute. Then a neat one-two set Tamas Priskin free who managed to slot the ball home 2 minutes before the break.

At 2-1 down at half-time, Forest were still hopeful of getting back into the game. However, at no point in the second half did it actually seem likely. Hit and hope is not the Forest way, and once again, I feel sorry for the Forest fans amongst the crowd of 14,730. More quality is required if Forest are to avoid a return back to unthinkable depths of League 1 football.