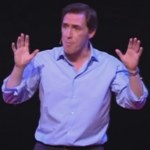 Rob Brydon is one of those comedians, whilst not edgy, can make the audience uncomfortable. They end up forming part of the show, normally to hilarious effect.

Rob began the show with a common theme; family issues. This time, the subject wasn’t divorce, but babies, which of course included impressions of Ronny Corbett. I guess if you’re playing golf with a fellow comedian, whilst your wife is giving birth at home to your 4th baby, it’s a story worth telling.

Mid-way through the show, Rob was in full flow. He always has a good rapport with the audience, so including them at any point, improves the quality of his overall performance. Fair to say, he likes to pick on Welsh towns, but that’s a topic that makes people laugh everywhere outside the place he is destroying at the time.

Rob Brydon gave us a fun performance, ending with his number 1 hit for charity, ‘Islands in the Stream’. I’ve no idea why, but at one point I was hoping Tom Jones was going to join him on stage for the song’s finale! The good thing about Rob Brydon, is that you’ll leave his show with a smile on your face.