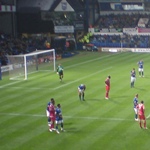 Forest and Ipswich have yet to set the Championship alight. Both teams were expected to perform well this season, but poor results have left them near the foot of the table.

It didn’t take much to convince me that a trip to Ipswich on a Tuesday night would be a good idea. Especially, when your mate tells you, he’s been given a route confirmed by at least 2 people guaranteeing us to get there in just over an hour.

I left around 5pm for a 30 minute drive near my mate’s place, as it was a good starting point for the journey ahead. On the motorway for about an hour and without yet seeing any signs to Ipswich, I began to ask some questions. The questions continued around 7pm as kick off was nearing. In the end I had to call up another mate up who re-directed us. The madness didn’t stop there, when almost 2 hours after setting out, I was 10 minutes away from my place.

Anyway the game had kicked off and I was following the it via a GPRS connection. It turns out Ipswich scored in minute 0. Not even sure that is possible. So whilst stuck on the motorway, I had no idea if Forest allowed Ipswich to have a goal start, but the fact remained Forest were losing 1 nil.

Eventually, we made it to the ground and the second half was already underway. Finding the way into the ground was still proving tough though. Finally we got to our seats in the 53rd minute. The scoreboard confirmed it was Ipswich 1, Forest 0. Robert Earnshaw was coming on as sub, just as we were getting comfy. Amazingly, 5 minutes after taking our seats, super sub for the night, Earnshaw equalised with probably his first touch of the ball.

Difficult to give a report on a game when you miss the first 53 minutes, but Forest did well in the last half an hour or so. Forest nearly came close to snatching a victory, but Ipswich prefered to go down to 10 men, than allow Dele Adebola to break free with just the keeper to beat.

All in all, it was definitely an experience and a memorable one at that. It probably would have been less memorable had we caught the whole game. I’d like to thank the two truck drivers for the directions to Cambridge city centre.