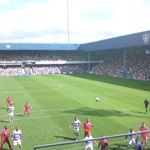 A strange start to the season, has seen Forest dominating games, but with minimal points to show for their effort. A lack of goals has left Forest with just 1 point from the opening 3 games.

The sun was out on a glorious day and amongst a crowd of 13,058, the Forest faithful were hoping that a strong performance against QPR would kick-start their season into action. QPR on the other hand were expecting to be promotion play-off contenders, especially with the Formula 1 moneymakers at the helm.

Unlike last season, Forest came out firing and were unlucky not to take the lead. But the usual story of missed chances lead to Forest being punished once again when QPR took the lead in the 25th minute, from a long-range shot by Mikele Leigertwood. Forest hit back in the 57th minute, with David McGoldrick putting away a close range effort after a great knock down from Dele Adebola.

In an open game with many chances, neither side were able to find a winner. Surpringsly, Forest and QPR have yet to register a victory this season, but the feeling is that both will improve and furthermore, play a major part in the Championship race.