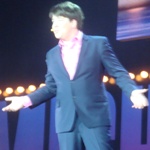 The weekend rolls on with a trip to Nottingham to see Michael McIntyre perform at the Trent FM Arena. From nowhere it seems, McIntyre has attracted an instant following and his UK tour is a sell-out.

I’d originally booked this event as I was hoping Forest would be playing at home, so therefore it would have been a kind of Grand Saturday. Unfortunately, Forest were playing away at Plymouth, live on Sky the following day.

The plan was to leave around 4pm giving us ample time to drive up to Nottingham. Well with things like train delays and even trains not appearing, it took a friend over 2 hours to get across London. In any case, we managed to get to Nottingham around 8pm only to waste more time looking for a car park. Then unbelievably, even more time trying to find a way out of the car park!

McIntyre was already on stage for about 20 minutes before we were led to our seats, which even that was an ordeal. In no time at all, thoughts of the last few hours disappeared, as McIntyre had us in hysterics. His observational humour was proving a delight for the audience in Nottingham, as everyone around us seemed to maintain a constant smile, followed by an outburst of laughter.

Michael McIntyre knows how to play the crowd. The material on Buying Shoes, the Bullshit Production on Ordering Wine and Morning Breath had everyone laughing from start to finish. Like Peter Kay, he is simply saying the things that you’re likely to have experienced. The difference is the purely delivery, with both comedians having mastered the art.

It was a pleasure to see Michael McIntyre in action. With central floor seats in a large indoor arena, it’s amazing how comedy shows have flourished in recent years. With another couple of McIntyre bookings to come, this time closer to home, I may yet catch a full show. In any case, it was another wonderful night.