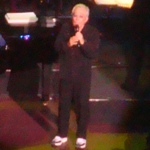 Is it really worth going to see an 81-year-old perform in concert? I guess it depends, but when the performer is Andy Williams, the answer is a definite YES!

It was also an opportunity to visit the legendary Royal Albert Hall for the first time. The venue is a superb music arena, although having a few pre-concert drinks at the bar was an experience, considering everyone seemed at least 40 years older than us! Nevertheless, I’m sure most of the over 65s must have been pretty fit, as I was exhausted by the time I walked up all the steps to the top floor.

Andy Williams performed a number of songs in the first half of the show, not clearly associated to the great man, but ones that he had won awards for, and hence, was clearly proud of. In the second half of the show, it was a virtual hit parade, with classics like Moon River, Can’t Get Used to Losing You, Love Story, Impossible Dream, Theme from The Godfather, Can’t Take My Eyes off You and Music To Watch Girls By.

One of my favourite moments was when he showed a video recreating the famous Fiat Punto commercial from 1999. Most of us remember it well, with the beautiful girl kissing the guy on the street. But Andy Williams had the audience in fits of laughter, after he replaced the young guy in the newer updated version, meaning it was now he that got the kiss from the foxy lady.

The performance of Andy Williams was a delight. For an 81 year to still be on tour is beyond belief. His prolonged career enables fans to see him again, along with those of us experiencing him live for the very first time. Moreover, he proves that age shouldn’t stop you doing the things you love doing the most.