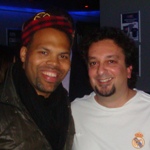 Eric Roberson was outstanding at the Stevie Wonder Birthday Party at the Jazz Cafe in May 2008. Now I had the chance to see this amazing singer/songwriter perform his own material.

The Jazz Cafe is a great little venue and the atmosphere is always good. With the anticipation of Eric Roberson coming on, it was packed out well in advance. So it was just a matter of finding a spot where you could enjoy the performance.

It was the first time I had been to a concert without knowing any of the material. But I don’t need to have heard a song beforehand to understand its quality. Eric Roberson performed tune after tune, and throughout the audience mostly sang along with him. He even took time out to sing into a mobile phone – not sure if was a) a video call or b) recording the video. It might even have been c) not recording at all, with the audience member just wanting to take a close up photo.

Eric Roberson played to his fans and you can tell everyone was thoroughly enjoying the performance. His improv song was a joy. Taking random words from the crowd and turning them into a song is no mean feat. But that just goes to show how talented he is.

I arrived not knowing any of his music. I left with 2 CDs and the confirmation that he is a true performer. It’s not easy for any artist to replace Stevie Wonder in my CD player, but for the time being it seems Eric Roberson has managed that. I’ve yet to give his latest album a full outing, but his greatest hits album, is truly great.