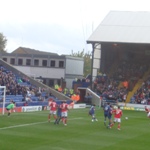 Forest’s season is going from strength to strength and have won their last 5 games in the Championship. A tough away game at Crystal Palace was the next task as Forest aim to keep climbing up the table.

It wasn’t that long ago since Forest were hovering around the relegation zone, but thankfully my Forest shirt arrived in the morning of the match at home to Derby and we’ve not looked back since. In fact, I didn’t wear it at home to Blackpool and that is the only time we have been beaten in the last 9 league games.

Sadly, our seats had a large column in front of us and some dangerous scaffolding above our heads, so it wasn’t the most comfortable of viewing areas. Luckily though it was a bright sunny day and both sides looked like they were up for an attacking game. However, after 40 minutes, Darren Ambrose scored a delightful free-kick to give Palace a 1 nil lead.

Just before the stroke of half-time, Paul Anderson was elbowed in the face by Palace defender Clint Hill, which sparked a brawl involving players and staff from both sides. The incident was right in front of the dugouts and you could tell from the reaction of the Forest bench that it was pretty serious. Nevertheless, I never expected the tannoy to come on, with what sounded like a commentator on Radio Palace telling Billy Davies to sit down and stop getting involved. I’ve never heard anything like it, and by the bemused reaction of the large Forest following, nor did they.

Forest came out fighting, well not literally, in the second half and were rewarded by a goal from David McGoldrick 3 mins after the break. The game could have been won by either side but in the end a share of the spoils was probably a fair result.

Whilst finding the ground from the station was pretty simple, the opposite can be said on the way back. No idea how, but for some reason, one wrong turn and lack of football shirts meant it took an extra hour to find the station. In any case, a crowd of 15692 had a nice day out in the autumn sunshine. Even the cheerleaders as half-time entertainment managed to bring some nostalgia back to football or is that a recent idea?