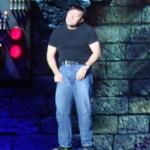 Ever since the 11 O’Clock Show, Ricky Gervais continues to cause controversy whenever he gets the chance to. So with 3 tours behind him, the topic of discussion has now turned to Science.

A pleasant trip from Paddington to Oxford, just in time to catch the main event. Unfortunately, we didn’t get a chance to see Stewart Francis perform. But at least, I’ve also got tickets to the show in Brighton in a couple of months time, so will make sure I’ll see him then.

Whilst in our comfy seats, Ricky Gervais entered the stage on something resembling a motorised trolley. I kind-of-like the tongue-in-cheek references to his awards, but can probably understand that others may not enjoy the constant mentions of how famous he is now.

What I want from Ricky is controversy mixed in with laughter. Whilst it’s difficult to understand why the tour is named Science, other than the fact he needed to call it something, it did cover one of his favourite topics, his childhood book of Noah. Again, some may say, it’s an easy target, but so what, it’s comedy. It had the audience in hysterics, especially the implied conversations between Noah and God. I did like the image of the Birds walking to the Arc, instead of flying.

Ricky talked about a Ken Dodd show he went to, but primarily it was to test the boundaries on how he could describe the mentally ill. He’s the type of comedian that says something in a way you know is funny, but has you questioning the fact of whether or not you should be laughing.

At times, with some of the material, Ricky Gervais probably pushed the boundaries to most people’s limits and probably beyond a fair few too. But then again, if that’s not the comedy you like or expect, why turn up in the first place.

Ricky Gervais had the audience laughing for almost the entire time he was on stage. I was glad to have finally seen him live, as I’ve loved his work ever since the 11 O’Clock Show and then of course The Office and Extras.