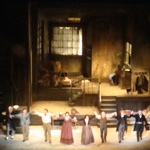 Going to the opera was a term I was only familar with in the movies. Finally, it was time to experience the world of opera for myself, starting with La Boheme.

I must begin with the fact that I’m not here to give a critical review of the Opera. With almost zero knowledge on the subject, there would be zero point in doing so.

The cold evening began with a glass of mulled wine. The guy selling the wine was also a Forest supporter and was able to provide a quick report on our victory, as I had missed the second half to catch the train, and ultimately, to catch the opera.

The Royal Opera House is an impressive building. Once inside, we took our centrally located seats high up in the amphitheatre. With no idea of the story, I found the start of Act 1 pretty unimpressive and at one point I felt that I could have written a better script. But the problem had probably more to do with the fact I had no real idea what was going on, only later learning that it was the basis of the predicament the students had found themselves in. Nevertheless, the storyline along with the singing performances improved as the opera continued.

My favourite moment of the night was inbetween acts. For a brief second, a friend was unsure whether or not it had finished, when she commented that “it can’t be over as she dies in the end”. To anyone else that comment may not have had the same impact, but for me, it was like the end of the film had been spoilt. Of course, I was probably the only one inside the Royal Opera House who didn’t know the story of La Boheme and one of the few not following the programme notes during the performance. I didn’t say anything, but it felt similar to someone telling you Bruce Willis is a ghost, half way through the The Sixth Sense!

Overall, it was a fantastic experience. I can finally say I’ve had a Night at the Opera. With at least one more booked in a couple of months, who knows I may become an expert before long. Then again, if I’m honest, there is no chance in that happening!