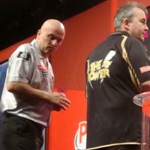 Finally, a chance to see Darts right on my doorstop. Well ok it’s less than a 10 minute train journey, so it’s as close to my doorstep as I could ever hope.

It’s the start of crazy weather season and the UK is now covered in snow. But it’s Friday and the opening night of the darts which also includes World Number 1, Phil Taylor on the bill. Unlike the set-up at Wembley, the tables at Alexandra Palace are much closer together.

There was an interesting match-up in the opening game between the inconsistent Wayne Mardle (No. 17) and the German qualifier Jyhan Artut. Mardle failed to show up once again and was completely outclassed by his lower ranked opponent. Artut going through to the next round with an impressive 3-0 victory.

Next came the preliminary match between Denmark’s Per Laarson and Philippine’s Christian Perez. In an interesting encounter, Perez managed to hold out for a 4-3 victory, meaning he’d be back for a 1st round match against Robert Thornton at the end of the night.

The third match of the night was also going to be the match of the night. Both on paper and on the oche, Dennis Priestly (No. 9) vs Kevin McDine was going to be special. The game had it all. Great comebacks, superb outshots and high scoring averages. McDine finally managed to come through this tight affair, with a 3-2 victory.

Now it’s time for the man almost everyone had come to see, Phil Taylor (No. 1). As usual, the noise was deafening as Taylor walked to the stage. In the end, it was a pretty routine affair, winning 3-0 with a 100+ average, which is the minimum we seem to expect from Taylor nowadays.

The final match had Scotland’s Robert Thornton up against Perez who had qualified earlier. In a drab affair, the world No. 16 finally came out on top with a 3-1 victory.

A fun night at the darts and it’s always an honour to see the Darts Master at his sublime best. The rest is just a bonus.