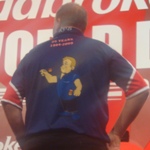 Even with the UK covered in heavy snow, it can’t be used as an excuse to miss a night at the home of darts. So it’s back down to Alexandra Palace to join faithful the Barney Army.

One of my tips for a successful tournament Kevin Painter (No. 15) was up against the Austrian qualifier Mensur Suljovic. The qualifier proved to be a tough first round opponent with The Artist managing to scrape through 3-1.

Next came the preliminary match between New Zealand’s Phillip Hazel and Slovenia’s Osmann Kijamet. This was a good tussle between the two qualifiers with Kijamet coming out on top 4-2, returning later in the final round one match against Andy Hamilton.

The third match of the night had two top players battling it out in a first round tie. It was the turn of England’s Jamie Caven (No. 26) against Scotland’s Garry Anderson. In a fantastic match, with both players on match winning averages, The Flying Scotsman triumphed 3-2.

Time for the Barney Army to sing their hearts out. Poor old Warren Perry had the tough task of taking on Raymond Van Barneveld (No. 2). The qualifier from New Zealand found the task almost impossible. With Barney on decent form, he cruised to an easy 3-0 victory.

The final match was between Andy Hamilton (No. 14) and Kijamet who had qualified earlier. The Hammer cruised to a 3-0 victory in a match that had the crowd cheering throughout.