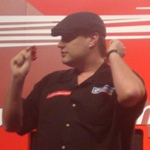 With reports that Alexandra Palace train station had closed and tv coverage showing the area at a complete standstill due to the extreme weather, it seemed almost certain that the event was going to be cancelled.

Even though a mate had called earlier to say the heavy snow had meant it was impossible for him to get across London, I still planned to make the short trip to Alexandra Palace. I was just about to turn off the TV when I heard Sky reporting that due to the chaos on the roads, there was a chance the event was going to be cancelled. With players struggling to make it and with safety of thousands of fans to take into consideration, it was probably a wise idea.

But then reports were coming in that some of the players had managed to make it to the venue, whilst others were on their way. There were a few hundred people inside the arena too. The PDC website was not saying anything specific in case of refunds and a similar lack of advice was provided by Seetickets and the venue itself. So I was torn between the warmth of my home or the crazy journey in the worst snow the UK had seen in years.

The moment I’d heard that there was a possibility of all the matches going ahead as presenters, commentators and players like Paul Nicholson had walked a couple of miles to get to the venue was all I needed to hear before an instant decision was made. One of the matches was already underway, but so what, I had to go.

It was an interesting journey, mostly trying to stay on my feet. A short train journey followed by an almost impossible walk up the hill to Alexandra Palace. The cars on the road were going nowhere, as the ones up the hill were stuck facing the ones down the hill.

One player who wasn’t waiting around was Dutchman Vincent Van Der Voort. Whilst I was still making that ridiculous journey up the hill, Greased Lightening strolled to a 3-0 victory against the qualifier from Gibraltar, Dylon Duo.

I managed to catch most of the preliminary match between Japan’s Haruki Muramatsu and Poland’s Krzysztof Kciuk. The man from Japan came out on top 4-1, going through to a round one match later on against Ronnie Baxter.

With John Part’s late arrival the next match was a superb tie between crowd favourite Terry Jenkins (No. 6) and the latest pantomime villain Paul Nicholson. By now there was around 1,500 inside the venue (around 75% full) to see the match of the night. The Bull scraped through 3-2, but I have a feeling we’re going to see great things from the Aussie-Geordie Nicholson.

Next up was Ronnie Baxter (No. 7) against qualifier Haruki Muramatsu. The Rocket was in fine form and with a superb display, shot to an easy 3-0 victory.

And finally it was the turn of 3-time World Champion John Part from Canada who was up against Toon Greebe from The Netherlands. The Dutch have provided a number of good young players in recent years, but Toon was unable to match hype with performance, as Darth Maple cruised to an impressive 3-0 win.

Favourite moment was back home watching the recorded coverage of the night. Sky cut to a shot of me, as Dave Allen and Eric Bristow were saying ‘credit to these guys for coming out in this weather without even knowing how they’re going to make it home, it could be the biggest sleepover ever’! Ok it wasn’t the easiest journey back, but it was well worth being a part of this crazy night.