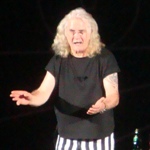 The comedy tour is going great with so many acts so seen live so far, but now it’s time to witness one of the old guard. Billy Connolly is a favourite amongst his peers, so it’s my chance to see his eccentricity in full flow.

Started the night with a great meal at a local pub in Hammersmith. A friend and a waiter made a slight mess of the order and we ended up with 3 meals between the 2 of us. Then it was off to the venue. With at least 150 minutes of non-stop action, a toilet break would mean missing part of the show. So it was a chance to detox, with just a few sips of water, sit back and let the Billy Connolly take over.

As soon as Billy Connolly entered the stage and engaged with the audience, it was clear everyone was going to have a good night. There was so many moments where he went off in different tangents, at times almost forgetting the story he’d started, but it didn’t matter, as the next topic was just as hilarious.

Good luck to any critic in the audience as he destroyed them with one of his routines, along with the latest technology that’s simply passing him by. He was also pretty controversial with his choice of topics and language, especially with a couple of ‘C’ words used in a few routines.

I loved the routine on drunks’ walking. Brought back so many memories. But my favourite had to be the buffet. Why do they make you walk past the buffet to your seat, then seconds later, you have to get up and walk back to the buffet to get your food? Why can’t you just get your food on the way! Superbly crafted and expertly delivered.

It’s great to see an outstanding performer at work. Eccentric, unstructured, but above all hilarious. Billy Connolly is an exceptional comedian. In essence, he’s like a mad man who can tell funny stories. A superb night of comedy and must for all to see!