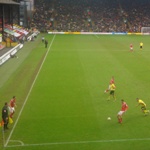 With a superb run of 14 games unbeaten, Forest have climbed from 19th up to 3rd in the table. A Boxing Day clash away to Watford will provide Forest with another tough test.

In a match of few chances, the home side were slightly on top without really threatening. Watford did have a shout for a penalty in the second half, but the referee waved the appeals away. Forest had a good chance to steal the win through a Blackstock chance late in the game, but the keeper made a great save to deny the striker.

The match ended in a 0-0 stalemate keeping both Forest’s chances of automatic promotion alive and Watford’s hopes of pushing for a play-off place. The large Forest faithful amongst the 17,086 were probably happy with the point. Now it’s 15 games unbeaten and no Forest fan would have thought that possible after bad start to the season.