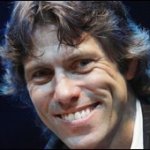 I enjoyed John Bishop’s performances on BBC’s Live at the Apollo and Michael McIntyre’s Comedy Roadshow so booked tickets to see his Elvis Has Left The Building Tour.

Not sure why I wasn’t expecting much from the Bloomsbury Theatre, but I was really impressed. In fact, in no time at all I’d warmed to the place and by the time I’d left it was already one of my favourite comedy gig venues. Even John Bishop mentioned he thought it would be just him and his mates turning out for the night.

I was slightly worried that my Italian mate would struggle with the Liverpool accent, but apart from a few things he missed, it never really became an issue. John Bishop’s comedy style keeps you interested in what he has to say and his performance was entertainment from start to finish.

John Bishop described his entrance at Live at the Apollo where the sudden burst of smoke blinded him just as his act was set to begin. Luckily, there weren’t any gimmicks here. He explained how he was a successful salesman, who by a stroke a luck was thrown into comedy. So it was slightly ironic that at a recent corporate gig, he had to present the award for Best Hand-Held Utensil at the Kitchen Utensil Awards. Shame he didn’t tell us what device won.

There was loads of gags involving his three sons and their devotion to him. “It must be cool having a dad who’s a comedian”, says a friend, “no, he’s a knob”, replies his son. He couldn’t understand why his youngest needed a mobile, as he didn’t know anyone. In fact, the only people he knew all lived in the same house. More to the point, he had nothing to tell anyone anyway, he’s 7!

I loved the routine where he went to the gym after at least a six month lay-off and was told he needed to have an induction again. “Why do I need an induction, I know when I on the rowing machine, it isn’t going to go anywhere”.

The show began and ended with his beloved Liverpool and a charity match he was asked to play in at Anfield. Video footage was shown of heroes like Kenny Dalglish and John Barnes explaining what a great player he was, along with a running gag about a superb shot from outside the box. When the final footage was shown, the audience loved it. Hearing the commentators mention John Bishop’s name every time he touched the ball was pretty funny, as was the moment he came off, to be subbed by King Kenny.

A really fun night, with John Bishop on top form. So much so, I’ve already booked tickets to see him perform the Sunshine Tour at Wembley later on in the year!