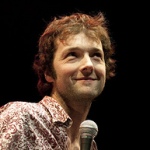 With five years since Chris Addison’s last tour, it was a great opportunity to a witness the star of The Thick of It at work at The Bloomsbury Theatre.

Slightly apprehensive about the show as these were front show seats and a friend had pulled out at the last-minute. Once there, I noticed that couple of people hasn’t turned up, basically leaving with 1 free seat on one side and 2 on the other. Thankfully, it was at the end of the row.

Didn’t take long for Chris Addison to mention Valentine’s Weekend. In the meantime, I was hoping the couple to my right would eventually turn up as I felt so exposed taking up 1 of 4 seats. He actually spent most of the gig either in the centre or directly in front of me. I’m sure there were moments where he considered saying something, but luckily a silly heckler just behind took almost all of his attention. Addison focused his attention on the apparent Director of Google Earth, slaughtering the lady as she continued with her incredible fabrications.

The performance involved highly clever and entertaining routines from sex, the gym, bankers and the BNP. Chris Addison explored class as expected, with humorous remarks like ‘EasyJet is a middle-class plot to keep BA for ourselves’. There was even time for a Q&A session, which was loads of fun too.

A lack of structure kept it entertaining throughout and enabled Chris Addison to go off in any direction he felt necessary. With a wealth of highly amusing material on offer, it was a fun way to spend Valentine’s Weekend.