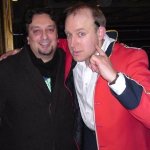 Having not seen the joke speedster live for around 10 years, I was really excited about Tim Vine’s Joke-Amotive Tour. Through experience, the key is not to keep laughing, as you end up missing half the gags!

Well I was back at The Bloomsbury Theatre for the third time in as many weeks. Up on stage first was the fine support act; comedian and magician John Archer. Pretty glad our seats were in the centre of the third row, as he used most of the first two rows to help with his routine. I loved it, especially as it had some logic, maths and comedy behind it. A truly superb performance paved the way for mr joke-amotive to enter the stage.

Anyone who’s seen Tim Vine and enjoys his humour, would understand how he had the audience laughing with seconds of coming on. I liken him to a comedian with a one-liner style set to 78rpm, with Jimmy Carr at 45rpm and Stewart Francis at 33rpm, thereby barely giving you time to laugh between gags. It’s therefore no surprise he once held the world record of 499 jokes in an hour.

His performance was hilarious, from the use of clever word play to the silly use of props, adding to the sharpness of the routine. I loved the running ‘torch’ theme, especially the banana shaped one. With the aid of his guitar, the audience were giving a few cracking numbers to a laugh at, whilst taking a break from the gagathon.

Tim Vine, along with support act John Archer, provided us with nearly 2 hours of pure entertainment. Tim Vine’s performance was as creative and amusing as ever. A must-see for anyone who enjoys this daft slapstick style of comedy. It was literally a laugh-a-minute gag extravaganza from the master of torpedo one-liners! It was also a nice surprise to meet him after the show, where he took time out to take photos with his fans.