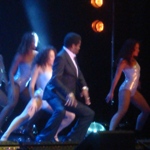 I’ve enjoyed the comedic style of Stephen K Amos ever since he appeared as the main warm-up act for the Have I Got News For You shows. His ‘Asbestos’ routine is timeless and made me laugh every time.

I hadn’t actually planned to go to the show, but earlier in the week it was clear a friend was dying to see Stephen K Amos perform, so a couple of clicks later and tickets were booked. After a lovely meal, it was time for the show. The lighting seemed slightly different to previous shows at the Hammersmith Apollo, but then I realised that it was being filmed for DVD.

Seann Walsh, the support act, was a pleasant surprise. He had the audience in the palm of his hand, considering more than half didn’t even know there was even going to be a support act. I also overheard the staff fearing that the crowd would go mental when they realised Amos was not going to be on for another 45 minutes.

For a brief spell, Amos became a distant memory, as Walsh entertained the audience. I loved the routine on life in London and how we get pissed off with waiting just 3 minutes for the tube, especially as that happened to me on-route to the venue. That followed with a superb imitation on the only place we are allowed to stare at people is when passing them by on the escalators in the underground. Couldn’t have been closer to the truth.

Now that everyone was warmed up, it was time for Stephen K Amos to enter the stage. A normal walk-on wasn’t enough, as he burst out to dancing to Beyoncé’s ‘Single Ladies’ accompanied by a host of dancers. Without doubt the best entrance to a comedy show ever. I’m sure even some from the world of music would have been envious too.

Stephen K Amos then provided us with an abundance of old and new comedic material covering the usual suspects; race, homosexuality and family. The routine with ‘Cooon’ Cheese was hilarious and mirrored the superb ‘Baboon’ act from previous tours. Even dealt with a couple of hecklers superbly.

Aside from the exceptional entrance, the emergence of Ollie will live with everyone who was at the Apollo. This poor 17-year-old kid from Watford sat at the corner of the front row and was at the receiving end of so many observations. There was a lovely moment when Stephen K Amos invite Ollie on to the stage for the finale. A memorable night that will live with Ollie forever, along with the knowledge that the next time he masturbates, he will see an image of the comedian’s face.

Another dancing extravaganza ended what was an amazing show. Of all the shows I have been to, it was the only where everybody gave a standing ovation. I felt the emotion for Amos at that point. Truly fantastic. Then I had a sense of bemusement. Everybody had sat down for a moment, whilst Amos said his goodbyes. Then before Amos has even left the stage, almost everyone was up and walking out, even though there was a band still playing the show out.

The show that Stephen K Amos delivered was outstanding. Simply the best entrance and ending to any comedy show. In case anyone is thinking that the standing ovation was merely an attempt for everyone to get up and leave whilst clapping, then that is far from the case. The sudden rush to the exits was more to do with the long wait prior to the show and during the interval due to filming for DVD. I just hope Ollie makes the DVD!