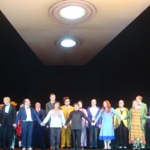 Even though this was my third opera in as many months, The Gambler was actually the first one I had booked tickets for.

The price of the tickets were the same, regardless of the view. So it was basically, first come first served, for the best seats at the Royal Opera House. At La Boheme, I had a nice central view high up in the amphitheatre. With The Gambler, the slightly off-centre seats from the stalls circle provided a nicer viewing experience. I arrived early and took my seat, as a friend was running late and was set to miss the first act. Thankfully, he managed to arrive just before the performance was to set to begin.

The Gambler is a new production at the Royal Opera House. Prokofiev’s opera is based on Dostoevsky’s work. Sang in English, but unlike previous operas this felt more like a play. Without a programme, it also felt almost impossible to follow the storyline. A friend kept saying, the story is not as important as the music, but couldn’t help noticing that there was a lack of that too.

Towards the end of the opera, it did pick up and some loose ends was cleared up, but overall I’m not so sure what the opera fraternity would make of The Gambler. Even though there were a number of strong performances, I couldn’t help feeling that as an opera, it just didn’t seem to work. All in all a fun night out, mostly spent trying to work out the plot.