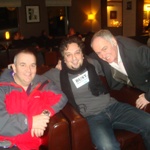 After Wembley, Alexandra Palace and The O2, the darts roadshow continued with a trip to Brighton for Week 6 of the Premier League.

I arrived at the hotel in Brighton a couple of hours early, just in time for a quick bite to eat. Whilst eating in the lounge, I thought I’d noticed Róisín O’Shea from Unicorn sat opposite, but couldn’t be sure as I’d only seen a photo of her on Twitter. It now felt like I was daydreaming, as further back I recognised members of the Lewis entourage. Then I glanced to my left and realised Ronnie Baxter was having a pre-match drink with his wife, as Adrian Lewis walked in. It started to feel like I was having a pre-match meal inside a 3D television.

The players were waiting for the security to head out to the Brighton Centre. I decided it was time to head to my room. Whilst waiting for the elevator, a couple of other guests had asked Adrian Lewis for a photo. As he was about to walk past, I decided to ask for a photo too. He said no problem and I gave my camera to his wife to take the photo. He was extremely friendly and we had a quick chat about his current darts and off he went.

The Brighton Centre was completely packed out and I had a good view from one of the table seats near the front, although I have to say the tables were possibly a bit too close together. Phil Taylor (No .1) was up on first against draw specialist Terry Jenkins (No. 5), but The Power completely outclassed The Bull with an 8-3 victory. Next up was the battle between Raymond van Barneveld (No 2) and Mervin King (No. 4). The King almost had the match in the bag, but amazingly and with the crowds support, Barney fought back to secure a 7-7 draw.

It was now getting quite rowdy in the venue, with almost half the crowd focusing on a cute girl in the front row up in the circle. The matches were going on whilst there were eruptions of “Where’s your boyfriend gone?” and “We can see you sneaking out”. Eventually she had to leave for the sake of the darts as Ronnie Baxter (No. 6) was up against Adrian Lewis (No. 7). The Rocket stormed into a commanding lead, but a superb comeback from Jackpot secured an 8-6 win. The final match had the in-form Simon Whitlock up against an out-of-sorts James Wade (No.3). Even with a fantastic 170 finish, The Wizard was no match for The Machine, who went on to wrap up an 8-4 victory.

I walked back into the hotel at the same time as the PDC match officials. Whilst taking a photo with Scott Gibling, he pointed out that Sid Waddell had walked into the hotel. Wow, I was now standing next to the legendary commentator and the man who is synonymous with the world of Darts. He was more than happy to have a photo taken too.

With the adrenaline pumping, I decided to get a drink at the bar. I was acknowledged by members of the security team who had recognised me from the Brighton Centre. I had a quick chat with Adrian Lewis at the bar and then sat on one of the couches in the lounge. It then dawned on me that just to my left was Ronnie Baxter and his wife, in front was Adrian Lewis and his family, and on my right was Phil Taylor, Sid Waddell and Dave Lanning with their family members.

I could hear Phil Taylor explaining to a drunken ‘fan’ that he already taken at least 3 photos with him already, but still allowed him to take one last photo. I felt I had to ask too and broke the ice by showing him a picture of the teenager that was fortunate enough to receive the match dartboard and a set of darts from The Power. It put a smile on his face seeing the teenager’s joy. I didn’t expect Sid Waddell to give up his seat for me to sit down and for Taylor’s son to take the photo. I thanked Taylor and asked him a few questions which he answered gracefully. I didn’t want to take up anymore of his time, even though at no point did he make me feel like I should leave. I was also in Sid’s seat, so felt extra guilty.

Fans were now taking photos with Ronnie Baxter, so I thought I might as well get the full set and he was very obliging too. At this moment, I needed another drink to let the last hour sink in. Adrian Lewis invited Phil Taylor to join his family and friends for a drink which I thought was a really nice gesture. But to my astonishment, he turned to me, noticed I was sat alone and invited me over too. It just felt wrong for an outsider to join them, so I said thank you, but no, it was ok. But Lewis was not taking no for an answer and said, don’t sit over there on your own, join us and even pulled up a chair.

With the night already beyond a darting fan’s dream, I was now sat at the same table with Lewis, Taylor and their family and friends. I declined the offer of a drink as I really felt I was taking liberties, even though I was invited to join them. At one point, I even muttered the words “this is mad” under my breath, but think it came out louder than I had hoped. Lewis made everyone laugh when he said I and one his friends looked like ‘Baddiel and Skinner’. I ended up showing them the Whyte and Mackay Fan’s Poster to see if they could spot the mistake. They noticed the missing 13 after a few seconds. Later, Baxter spotted that the 13 was a 3 too.

I’d love to say I had a great night sleep, but my mind was in overdrive. At breakfast, Phil Taylor and the members of the security team were already there. I sat on the other side of the room, and it was really nice of Sid Waddell to walk past and say hello on route to the buffet. After breakfast, I ended up sharing an elevator with Raymond van Barneveld. Barney was really friendly and we had a chat about Holland and Darts.

Back in the room, I decided to get ready and catch the earlier train. I had more than enough excitement and felt it was time to leave. I have quite a vivid imagination, but even I’d never daydreamed of the events that had unfolded. A massive thank you goes out to Adrian Lewis, Sid Waddell, Phil Taylor, Ronnie Baxter, Raymond van Barneveld, the security and the officials. All had a part to play in a great evening/morning, but Adrian Lewis went beyond the norm and really made it a special night. Now all I need is the hotel’s CCTV footage, as I doubt my friends are really going to believe this story!