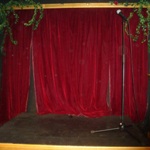 Thanks to an announcement on Twitter, I’d booked a couple of £6 tickets to see Michael McIntyre’s Work In Progress at Leicester Square Theatre.

Unlike previous occasions where I’d seen Michael McIntyre at the Trent FM Arena, Wembley Arena and The O2, it was nice to see him try out his latest material in a small and intimate venue. As there were no specific seating plans, we arrived early and my mate suggested he’d like to sit right at the front. I was slightly dubious at first especially as the front row was almost touching the tiny stage.

Comedian John Gordillo kicked off the evening, before finally introducing Michael McIntyre. Within seconds, he noticed the lack of air, along with a strange odour in the basement of the Leicester Square Theatre. To his and our amazement, he was handed a foot-long air freshener by the guy behind the bar. This gave him enough ammunition to improvise a whole new routine. Although, I’m not sure he needed to spray as much air freshener as he did, almost causing many of the audience in the front row to pass out. Luckily we all survived and there was no need for the pursuit of any lawsuits.

Michael McIntyre’s new material was well thought out and at numerous times had the audience in hysterics. The comedy definitely worked well in a smaller venue. He did comment though at one point during the performance, when I slapped my thigh instead of clapping like the rest. I was holding a beer in one hand, but with him no more than a foot away, it hard to miss a lazy attempt at applauding.

He then checked with John Gordillo as to how the performance was going. Having been told he’d managed 40 minutes, he seemed really pleased with the reaction to the new material. Then for some unknown reason, I couldn’t help but jokingly mutter, “well 20 mins was on the air freshener”. McIntyre laughed and then repeated my comment.

In a nutshell, the next 10-15 mins went something like this and throughout the audience was cracking up, including McIntyre.

(MM) [tells the audience] He cheekily said I spent 20 mins talking about the air freshener
(MM) What’s your name?
(CS) Chris
(MM) Where are you from?
(CS) Winchmore Hill
[I know not to say London to that one – he then did a routine on Harrow on the Hill and I thought that was it]

(MM) What do you do?
[I hate that question. It’s always been my biggest nightmare to be asked that at a comedy event]
(CS) Nothing
(MM) What did you do today?
(CS) Can’t think of anything
[I seriously couldn’t think of a single thing as not much had happened]
(MM) Wow, you’d be really be good at speed dating! From the time you woke up, spanning all those hours, you can’t think of a single thing?
(CS) No. Oh I played darts.
[I actually made that up, as I hadn’t played darts earlier. I couldn’t think of anything at all. I thought it was the best I could do, as I had played almost everyday in the past couple of weeks]
(MM) The only answer you can come up with is Darts. Nothing either side of that.
(CS) No just darts.
(MM) Did you threw a dart, it landed on the keyboard and that’s how you managed to book tickets tonight?
(CS) Yeah something like that.
(MM) Is it real darts or like those fake velcro soft darts?
(CS) No real darts.
(MM) Where do you play with these darts?
(CS) In the backroom.
(MM) And who did you play darts with today?
(CS) Alone
(MM) Something tells me that you probably lost.
(CS) It was close
[he seemed to like that comment]
(MM) So do you live with anyone?
(CS) No, I live alone
(MM) Oh I feel really guilty now for saying all that stuff!
(MM) Are you here with anyone tonight?
(CS) Yes a friend
(MM) Oh he has a friend!
[MM applauds and turns to my mate]

Now I could relax, as it was my mate’s turn to answer a few questions.

(MM) And what’s your name?
(SN) Stefano
[MM on hearing Italian accent, rolled off a few Italian based jokes, also referring to the Italian on the air freshener. Stefano actually corrects a couple of his pronunciations]
(MM) So where are you from in Italy?
(SN) Florence
(MM) Florence, amazing beautiful place. Where do you live now?
(SN) Queens Park
(MM) So you came to Queens Park, looked around and thought this is for me, beautiful architecture, I’m leaving Florence.

There was so much more. That was loads of fun and the audience got an extra 15 minutes or so of Michael McIntyre’s astonishment at some of the simplest and bizarre answers in history. I then remembered why I couldn’t think of anything to say as I had gone to bed at 6am, up at 2pm, primarily due to watching 15 episodes of Countdown (mainly the numbers game) and also wrote a review of the previous time I’d seen him. Glad I said I did “nothing” as he would have had a field day with either of those responses. He shook our hands and off he went.

Another memorable and really entertaining evening, with a mixture of immense joy and disbelief. So much so I didn’t get round to taking a photo. I’ve since booked more shows to see Michael McIntyre, but will probably avoid the front row, as no doubt he may try another speed dating routine on me!