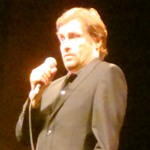 The final ever BBC Comedy Presents had a strong line up with Ardol O’Hanlon headlining the show at the Bloomsbury Theatre.

Back at one of my favourite venues, we took our seats near the stage. Host for the evening Dan Atkinson had the audience in the right mood after a good warm-up set. Marlon Davis, continued with an entertaining routine, before Sara Pascoe delivered a humourous performance.

Angelos Epithemiou, better known as a panel member in the latest series of Shooting Stars, was the first half finale. A superb, strangely idiotic routine, had the audience in the palm of his hands. At one point, he stared me out just after I’d taken a photo of him, even posing for another one during his routine.

The second half began with a hilarious musical improv routine performed by Abandoman. Really clever and thoroughly enjoyable. A surprise appearance next, when Micky Flanagan, a late addition to the bill, entered the stage. With a fantastic stage presence, his performance was sensational, especially the ‘nosy neighbour’ routine.

The final ever BBC Comedy Presents performer was Arlon O’Hanlon, who maybe past his best, still delivered a really entertaining routine. A great night of comedy, with the stand out performance perfected by Micky Flanagan. It’s a real shame that this event is to be discontinued.