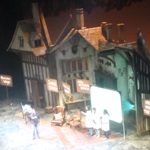 So it’s back-to-back nights at the National Theatre, with the Mark Thomas Manifesto Election Special.

I was in two minds booking an event on April 6th and/or April 7th as it coincides with a really sad period in my life. But 4 years on, it was obvious my mother would have rather I was out having fun, rather than staying in reflecting at her loss.

The National Theatre is even more impressive when observed from high up in the amphitheatre. The direct views from the stalls are great, whilst the amphitheatre hangs over the auditorium offering a completely different experience, almost like hovering above the performance.

One year on from the work in progress shows for the People’s Manifesto, it was interesting to see how far both the serious and the more obscure ideas had developed. There were numerous ‘interesting’ ideas put forward by a variety of audiences, but the one that received the loudest applause was the ingenious ‘if it pisses down with rain on a bank holiday, it will be considered a rollover’.

Mark Thomas introduced Danny Kushlick, the founder and director of Transform Drug Policy Foundation, who will present the People’s Manifesto in the constituency of Bristol West. Notable policies included the introduction of a maximum wage, the scrapping of Trident and the introduction of a Tobin tax on all currency transactions.

A fun and rewarding night out, apart from the pathetic heckler during Danny’s speech. I had a feeling that if Mark wasn’t going to climb into the amphitheatre to thump him one, members of the audience were likely to lynch him. Eventually, the audience did verbally turn on him forcing the annoying heckler to sulk in his seat. Well done to Mark Thomas, all the audiences throughout the tour, and good luck Danny Kushlick.