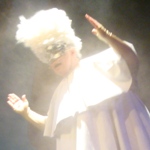 I managed to get tickets for the pre-tour at the Arts Depot, prior to the announcement of the full Katy Brand’s Big Ass Tour. The Studio Theatre is perfect for any artist requiring instant feedback from a small audience of up to 150 people.

A superb view, almost too close, as Katy Brand entered the stage. I was already in stitches just prior to that, as my mate for some reason or another, thought he was actually going to see Jo Brand!

Katy Brand played a number of different characters on the night, mixed in with parodies from the world of music. The parody of Lady Gaga was mildly entertaining, while the Amy Winehouse drunken wiggle put a huge smile on my face. Her Mariah Carey performance was superb, especially the vocals, while the multiple Lilly Allen impersonations was well written and performed.

The Queen and the half-Greek character were ok, with the footballer’s wife a significant improvement. I didn’t really follow the ongoing Kate Winslett parody, but the standout performances were Army Captain Rosie Fielding and drunken Caroline. These two characters were played superbly, with Captain Fielding also pulling off Beyoncé exceptional Single Ladies.

It was a really fun night out and hopefully for Katy Brand’s sake the laughs increase when she performs at larger venues. I’ve also had to rethink what Lionel Richie’s ‘Three Times A Lady’ is really about!