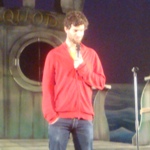 Back at Hammersmith for another event, but this time it’s at the Lyric Theatre with Richard Herring hosting the comedy night.

A quick bite to eat at the Lyric Theatre, before taking our seats. Wearing a Mr Perfect t-shirt, Richard Herring entered the stage. Another indication at his refusal to grow old, simply because age suggests so. There is no doubt he won outright ‘as the person who had eaten the most amount of carrots in the day’, through a quick audience straw poll. A thoroughly entertaining set, including loads of periodic table Q&As, before introducing Dan Antopolski onto the stage.

Unfortunately for the comic, an audience member’s alcohol level had reached annoying heights, almost trying to take over the show. At one point, it was an almost a one-to-one therapy session. He tried being nice, nasty, funny and rude, but nothing was going to stop her telling everyone that her boyfriend had left her, culminating in Dan replying ‘I have no idea why he left you’. Finally, he was allowed to continue his routine, ending with an inspired 4 minute rap.

Up next was Andy Parsons, who immediately opened with the line “I dumped my girlfriend today”, which had the audience in hysterics, as the annoying heckler had been led away after Dan’s performance. Another quality performance, before a short interval. Richard Herring was back to introduce the final act, Ed Byrne, who was excellent on the night. Even so, his routine at The Big Libel Gig will always be tough to top.

Overall, quality performances all round, including Richard Herring’s great interactions with the audience, especially the Italian girl from Bergamo. Enquiring about anyone famous from there, she mentioned Donizetti. Even my Italian mate wasn’t too sure who he was. I had to google him when I got back and it turns out he’s a composer. In fact, he composed “Lucia di Lammermoor”, an opera I’d seen a couple of months earlier!