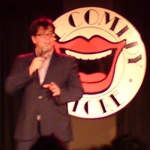 Following the resounding success of the Comedy Roadshow for both Michael McIntyre and his guest comedians, it was announced that the Comedy Store would host a series of eight Comedy Showcases.

Referred to as the FA Cup of Comedy, the show kicked off with Michael McIntyre warming up the crowd. I’d seen him the previous day, in another venue about 200 metres from the Comedy Store. Of course, by now I pretty much know the whole routine, even though he adds the odd new element here and there. I enjoy his interaction with the audience and was also looking forward to eight top comedians strutting their stuff.

I was gutted that I’d forgotten to charge the battery for the new camera. Even though there was an announcement that no photography was allowed, it didn’t stop a girl in the front row literally pointing her camera at him. After about a minute or so, a bemused Michael McIntyre realised that it was unlikely that she was taking so long to take a photo. ‘Are you recording this?, if so, why didn’t you wear all black and sit incognito further back?’ The cheeky girl immediately put her camera away, only later to give him her tickets to get signed, during the performance.

The performances on the night were really entertaining from Gary Delaney’s one liners to Andy Askins’ offbeat comedy songs. Good performances too from Rob Rouse, Charlie Baker and Lucy Porter. However, the stand-out performances came from Ian Stone, Imran Yusuf and Hal Cruttenden. All three had the audience in hysterics throughout the whole of their routines. If I had to pick one, and to be honest all 3 were exceptional on the night, I’d probably give it to Imran Yusuf. Nevertheless, I hope that all 3 make it to the Comedy Roadshow.

Superb night out, with some outstanding performances on the night. Good luck to all of the performers.

UPDATE: Imran Yusuf has been comfirmed as a guest performer on Michael McIntyre’s Comedy Roadshow.