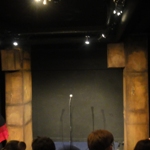 Almost 6 weeks since I’d last seen Michael McIntyre, so it’s back to Leicester Square Theatre for another work in progress gig.

In the foyer, I’d overheard Michael McIntyre ask “who’s playing in the main theatre?” As I walked past, I said that it was “Bill Bailey”, then quickly moved on, taking my seat in the basement. After our previous encounter, at one of the earlier work-in-progress shows, I didn’t fancy being in the spotlight again.

John Gordillo kicked off the proceedings again with another good performance, before paving the way for Michael McIntyre to take over. The material was similar to the eventful one in March, but with slight tweaks here and there. Rather than tweaks, it probably has more to do with the way the details are remembered and then performed. It seems he prefers to remember the topic, rather than the whole routine. This leads to a different version of the same gag every time.

Michael McIntyre asked the 50 odd audience for a show of hands if ‘Road’ formed part of their address. Then asked if anyone had any alternatives. My mate kept trying to shout out mine, but thankfully he was blanked throughout. Surprisingly, ‘Street’ was never mentioned, but loads for ‘Avenue’ and ‘Lane’. Then a lady shouted out ‘End’, which took McIntyre and the rest of us by surprise. McIntyre played on the fact that it sounded like she wanted him to ‘End’ the performance, with a witty routine.

Another enjoyable night out with Michael McIntyre once again entertaining a tiny room of people.