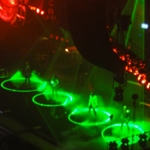 It’s the second of two back-to-back nights at the O2, with the Black Eyed Peas taking centre stage again.

Voted in the General Election, before heading off to the O2. There was just enough time to eat a pretty tastless hotdog, prior to Cheryl Cole performing Fight For Your Love. I still find the irony of the song hard to stomach. Unlike the previous night, this time around will.i.am joined Cheryl on stage for 3 Words. Even though there were hundreds of screaming kids out to see Cheryl, I had the urge to shout out No More, instead of the usual Encore.

Once again, the Black Eyed Peas transported themselves into the O2 Arena, cracking off with Let’s Get It Started, before entertaining their fans to Rock That Body, Meet Me Halfway and Don’t Phunk With My Heart.

Time for a few solo performances, including Fergie with the excellent Glamorous. will.i.am, with his sensational i.am.robot DJ set, entered the stage, pumping out tune after tune, and in turn enthralling his audience. These included American Boy, Don’t Stop Till You Enough, Thriller, Jump Around, OMG, Smells Like Teen Spirit, Sex Is On Fire and Sweet Dreams.

The Black Eyed Peas rocked the house with Don’t Lie, Shut Up, Pump It and Where Is The Love?, culminating into a superb finale of Boom Boom Pow and I’ve Got A Feeling. The Black Eyed Peas were sensational and I’m so glad I had the chance to see this extavanganza twice in 48 hours!