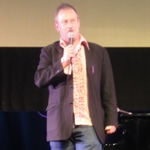 Considering I’d missed an earlier School of Gifted Children 5 weeks ago, I was determined to make it to the May Ball – Module One.

It was the evening after the early hours of the General Election result. With no clear winner, most of the audience seemed exhausted after staying up through the night to watch the race unfold. The only thing that was clear, was that nothing was clear. A slightly somber Robin Ince entered the stage, sharing the pain felt by most of the audience. However, an array of ‘gifted children’ from the worlds of comedy, science and beyond were backstage waiting for their opportunity to enlighten us.

It was up to Martin White, with his karaoke-style entertainment to give us a kick up the backside and awaken us from this nightmarish dream. With random audience answers defining the lyrics and musical notes, along with a 3 syllable title, Napalm Death was the astonishingly catchy outcome.

On stage next was Andrew Collins with his attack on the red squirrel brigade and their somewhat racist goal of wiping out the grey squirrels. He also let it be known that he’d like a robin to eat from his hand, a duck to give him a kiss on the cheek and to walk hand in hand with a pigeon. I wish him well with all his ambitions.

With her self-confessed Susan Boyle appearance, Susan Vale cracked on with ‘normally I just do gags about quantum physics and end with a joke about nobs, but I can’t because Brian is here tonight.’ With her enormous collection of CD’s from the Fall and audience participation, her routine was disturbingly funny.

‘Wonders Man’, Professor Brian Cox focused on the lack of government investment in scientific research. As I’d hoped, a spectacular slide show followed, with astonishing images including the Earth as a just a pale blue dot, along with the Milky Way in all its glory. Climate change deniers were provided with a lesson on ‘known’ facts, while astrologers who continue to correspond with him were told where to go in no uncertain terms.

Surprisingly, Dr Simon Singh was introduced next for a brief talk on libel reform, covering his ordeal with the British Chiropractic Association. He in turn introduced Ben Goldacre, focusing the plight of Dr Evan Harris, having lost his seat in the General Election to a Christian fundamentalist Conservative in the early hours. Both Simon and Ben arrived as a show of support for Evan, and after the 4th attempt to sound out the ex MP in the audience, he finally made his whereabouts known and the response was an immediate standing ovation.

The science talk continued with Adam Rutherford taking on mantle covering topics like ‘if we came from monkeys, why are there still monkeys?’ He focused on evolution and genetics, with the latest evidence on the often maligned Neanderthal. Maybe we really are closer to them than we are led to believe.

Gavin Osbourn, still fresh from playing the music to Napalm Death earlier, gave the audience a superb performance on the first time he’d seen Professor Brian Cox on HD. So yet another ‘gifted child’, focusing on the rise and rise of the ‘young’ professor.

Marcus Brigstocke was to provide the finale with a bout of comedy to send us all home with a smile on our face. He didn’t disappoint with his magic numbers routine, along with one of my favourites, the London bus ad campaigns.

So that was it. Or was it? The headmaster Robin Ince came out once again to a fully enlightened, and extremely tired audience, to announce yet another special guest. This time it was Tim Minchin. Walking barefooted onto the stage, the audience were given a rendition of The Pope Song, the first time he’d performed it live. That was the icing on the tastiest cake ever made!