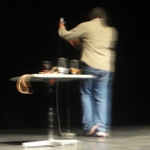 Having only seen glimpses of Reginald D Hunter, mainly on shows like Have I Got News For You, I was intrigued to see him perform live.

Back at the Arts Depot, but this time in the larger Pentland Theatre. The night began with the support act, Steve Hughes, with his brand of intellectual humour. There were a number of gems, especially the material on Murdoch, but my favourite had to be the ‘straight men, gay men’ routine.

After a short interval, it was time for Reginald D Hunter to take to the floor. Even by his own admission, this wasn’t going to be a continuous laugh out loud stand up routine. In fact, while there were many moments where the audience were in hysterics, this felt far more like a comedy lecture. The Tiger Woods material was exceptionally good. Suffice to say Nelson Mandela and Barrack Obama were not immune from his criticism.

I did feel sorry for poor Rupert, the young teenage Conservative. He was sat a couple of seats away from me, at the front of the stage. Imagine Reginald D Hunter asking who’d just voted Tory in the election, only for a dream stereotype to have the guts to put his hand up. Such an easy picking for the smart comedian and to be fair because of that he let him off lightly.

So there you have it. A comedian who swayed away from normal stand-up and towards a routine with principles presented in a humorous way. I really enjoyed it and would love to see Reginald D Hunter performing again.