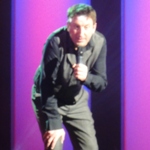 I’m a massive fan of the unscripted banter between Lee Mack and Dave Mitchell on the panel show Would I Lie To You? along with the scripted banter with Tim Vine and Miranda Hart in Not Going Out. Now I had the chance to see him perform live at the Apollo.

Simon Evans opened the show with an excellent opening performance. Pointing out that he had no eyes, the audience was fixated, although a few seemed to have noticed anyway. His calm, upper class style of comedy was a hit, even though at times he had us on a knife-edge, which was totally apparent during the English, Welsh and Pakistani joke. Complete silence, followed by sense of relief and laughter.

Lee Mack began his Going Out Tour, which was being filmed for DVD, with a magic trick. He picked out a teenager from the audience, invited him on stage, then locked him up in a magician’s chest. Instead of completing the trick, he ushered him off stage, shouting out “I did say NO kids.”

Rushing back and forth from the stage, he was evidently a different performer from the support act. Flowing with energy, Lee Mack was enjoying himself up there. Of course his style is often referred to as a modern-day Eric Morecambe. His humour is fitting for both the 1970s, as it is for 2010.

The show was full of interactions with the audience and his apparent annoyance at the hilarious responses shouted out to him. There is no doubt that is what he really wanted to hear, but seeing him fueled with anger was brilliant to see. It’s almost like we were all playing the part of David Mitchell.

There were so many highlights, but the impression of scousers sounding like dolphins was outstanding. With his disregard of Twitter and other technological advances, he was once asked “have you tried disabling cookies?” to which he responded “well, I once bit the legs off a gingerbread man.”

All in all, a must see performance. I loved every minute of it. Simon Evans was also a great choice as a support act. Lee Mack, thank you for a superb evening of comedy.