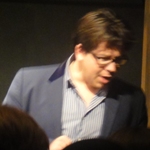 In the basement for another dose of Michael McIntyre, working to perfect his routine for the upcoming Comedy Roadshows.

A small treat for those arriving early as the owner of the Leicester Square Theatre allowed people into the main hall to see Andy Sharrocks & The Smokin Jackets. Not really a country music fan, but I thought the band were pretty good.

In the basement, John Gordillo was up on stage first, but unlike previous shows, he performed for over 20 mins. Practising for his appearance on the Comedy Showcase at the Comedy Store, He had the audience in stitches talking about his Spanish father’s Communist views. Both the accent and the material were spot on.

At one point, Michael McIntyre jokingly barged open the door to correct John Gordillo on the number of venues and people who had seen his sell-out tour. Slightly disparaging for the support act, who to his own admission is barely able to sell out venues in Leyton Buzzard.

Unfortunately, Michael McIntyre’s performance on the night was slightly under par, but to be fair to him, he was unwell. One of the highlights was when he asked if anyone had any paracetamol, only for an audience member to provide him with an astonishing array of tablets. That inevitably lead to a fun exchange with the audience, involving a number of the drugs on offer.

A fun night out, with John Gordillo outshining a rather poorly Michael McIntyre.